Skip to content
This happy couple recently took dance lessons at Dance SPA.  Congrats to Bill and Malia on your Wedding day!  We hope your First Dance was a hit with your friends and family.  What an honor to be featured by the Chicago Tribune ( Bill and Malia’s Story:  Original Online Artical )  Best of luck!  Read their love story below. 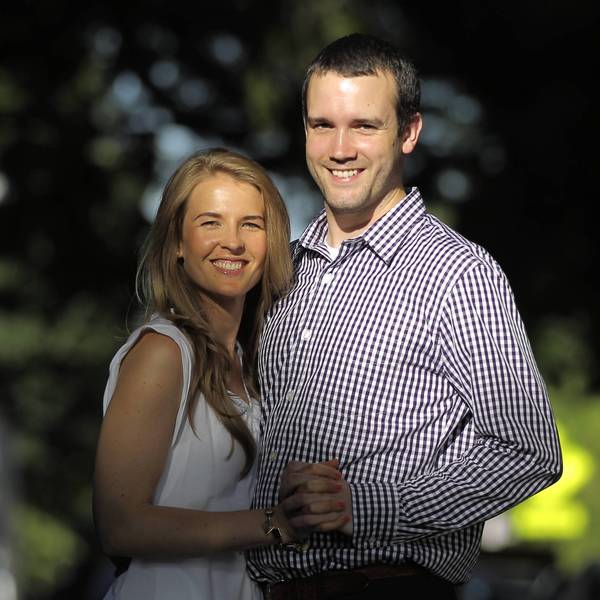 It was just after Labor Day in 2008 when Malia Burns took a break from the commotion at the Seattle wedding reception of her dear high school friend, Rose Pierce.

Alone in a small alcove away from the action, Malia was watching the Ohio State-USC game on one of the many TVs stationed around the room. (The wedding couple are huge college football fans.)

“All of a sudden, Rose’s aunt and uncle walked up to me and we chatted maybe a half an hour,” Malia said. “And at some point (Aunt Cindy) asked if I was single and I said I was and she said, ‘You have to meet this wonderful young man, Bill Kiolbasa. We met him at the rehearsal dinner last night.'”

Malia did not suspect she had just been targeted by shuttling matchmakers, Cindy and Jeff Pierce, of Tucson, Ariz.

Based on their rave review of Bill, Malia walked up to the bride and said, “Who’s this Bill Kiolbasa guy?”

Bill, the bride explained, was a Chicagoan and her great pal from Notre Dame, where they both went to college (hence the passion for college football).

“He’s the greatest guy in the world,” Rose said, “Would you like to meet him?”

Meanwhile, on the other side of the reception hall, Aunt Cindy and Uncle Jeff were working on Bill. And they pretty much got the same reaction from him.

They told him, “You really have to talk to this girl we met. She teaches for Teach for America and lives in New York. That’s not so far from Chicago.”

“They were selling pretty hard,” Bill said. “They made me a little nervous. They pointed her out and I said, ‘OK, OK.'”

But he didn’t make a move. “I was kind of dragging my feet.”

Meanwhile, the love shuttle continued with Cindy and Jeff back at Malia’s side to report, “Well, we’ve told him that he should come introduce himself” and Uncle Jeff piped up, “If he doesn’t, he’s an idiot.”

Now back to the reluctant Bill, where Cindy and Jeff pressed on. “I’ll go outside, take a lap, take a deep breath and I’ll say hello to her,” Bill told them. “If you come back before I do that, you’re going to make me so nervous I wouldn’t be able to.”

(A side note: Cindy Pierce said this is the only time she ever acted as a matchmaker but after meeting Malia and Bill separately that weekend she had “just an overwhelming feeling” they’d be good together.)

And so Cindy and Jeff backed off — but they spotted Bill as he caught Malia’s eye. The two young people smiled at each other and pretty soon they were dancing the night away.

At an after-party at Malia’s parents’ house, Malia said, “I fell asleep on his lap on my parents’ couch. He sat up straight all night long so he wouldn’t wake me up.”

“From the moment I was leaving to go back to Chicago I started thinking, ‘When could I see her again,'” said Bill.

Two weeks later, Bill flew to New York for the weekend. Two weeks later, Malia flew to Chicago. “Every two weeks, that’s what we did: Delta shuttle from Midway to LaGuardia. Usually about $220 round trip,” said Bill.

By Christmas, less than four months after they met, they were telling each other, “I love you.”

When the school year ended, Malia, who is now 28, moved to Chicago. She got a job teaching in a charter school network. And Bill, also 28, an accountant, became so compelled by her passion for helping students that he took a charter school accounting job to help the school make the best choices on where to spend its limited funds.

When she was ping-ponging between Bill and Malia, matchmaker Aunt Cindy’s parting words were, “Invite us to your wedding.”

And so they did.

Bill Kiolbasa and Malia Burns were married July 7 on Orcas Island, off the coast of Washington, north of Seattle.

The guests got a laugh when they read the wedding program. It was imprinted with a quote from Bill — something he told Malia on the dance floor, 30 minutes after that first meeting:

“I want to be an honest gentleman about this, so I need to tell you that I don’t think anything truly romantic could happen from meeting at a wedding.”

Matchmakers, be brave! Sometimes your efforts will be rejected, disparaged or ignored. But once in a while, even when the singles are reluctant, wonderful things can happen.

See our Reviews on Yelp

Scroll back to top